So you want to go mountain gorilla trekking ! It’s an awesome idea! We’ve been, and we can tell you that it’s definitely, absolutely, positively worth it. It's one of Our favorite things to do in Uganda . Standing just a few feet from these gentle giants in their forest habitat and seeing them munch on fruits and plants, play with or groom one another, and idly look at the curious bipeds looking at them – these are magical moments that stay with you for a lifetime. But to get to be in that special place, you first must decide where to go to see them. Do you want to go gorilla trekking in Rwanda? Or do you want to go gorilla trekking in Uganda? Well, answering that question is what this blog post is all about.

An adorable infant gorilla snacking on a shoot

The mountain gorillas that visitors trek to see are those that have become habituated to the presence of humans. The process of habituating them to humans takes about 2 (two) to 5 (five) years. But even though they become used to the presence of humans, there are still strict rules in place to ensure we interfere as little as possible with their habitat and way of life.

For starters, only one group of eight people is allowed to visit each gorilla troop per day, and then only for one hour. Other rules, as discussed in 20 things to worth knowing about mountain Gorilla Trekking include not making loud noises or sudden movements while in their presence.

Where can I go gorilla trekking?

The decision to go gorilla trekking in Rwanda or Uganda usually rests on factors like cost and accessibility. You also want to consider what else you’ll do on your trip to the country, as the cost and effort of a gorilla trek means you’ll likely only be seeing gorillas on one day. We discuss all these matters in just a moment, but first, let’s answer a very important question .

The mountain gorillas of Rwanda

Rwanda is a small and mountainous East African country with a population of around 14 million people. It’s sometimes called the pays des mille collines, which is French for ‘land of a thousand hills’. The main language in the country is Kinyarwanda, spoken by most citizens. English, French and Swahili are also official languages.

Rwanda is a phoenix of the twenty-first century, having risen out of the ashes of its tragic 1994 genocide to become one of Africa’s great success stories. It’s capital city of Kigali is well-known for its beauty and cleanliness. In fact, did you know that’s illegal to buy, use or sell plastic bags in Rwanda?

Gorillas are social animals who live in troops their whole lives

The mountain gorillas of Uganda

Uganda is a landlocked country consisting of massive plains, volcanoes, snow-capped mountains, thick forests, savannah, immense lakes, diverse wildlife and more. The population of about 45 million is extremely diverse, and speak more than 50 languages. Ugandans are known for their warmth and friendliness. It’s also important to note that Uganda is considered to be the best English speaking country in the whole of Africa, which is very helpful for tourists.

Most of Uganda’s mountain gorillas live in Bwindi Impenetrable National park. Bwindi is an alpine forest that sits between 1,160 m meters and 2,607 meters above the sea level. As the name suggests, the Bwindi Impenetrable National Park encompasses a thickly forested area. Given the density of vegetation, it can be pretty dark in the forest. It’s a UNESCO World Heritage Site, and rightly so.

If you look at the map of Uganda below, you can see that Bwindi Impenetrable National Park is in the extreme southwest corner of Uganda. This places it decently far from the capital city of Kampala and Entebbe International Airport, both of which are in south central Uganda. Moreover, the roads connecting the two aren’t smooth, open highway. So the drive takes about nine hours. It’s advisable that you travel with someone who knows the region rather than road tripping on your own.

While you can take a short flight from Entebbe to Bwindi, driving is a cheaper option, especially as part of a tour group. Some who want to go to Bwindi for gorilla trekking actually choose to fly into Kigali, Rwanda’s capital city, and drive north across the border, as this is a shorter drive that lasts about four hours.

Get your free Uganda guide!

Everything you need to know about Uganda .

Trekking prices in Rwanda and Uganda

Accessibility of gorilla parks in Rwanda and Uganda

Given the relatively close proximity of Volcanoes National Park to Kigali Airport, Rwanda is the better country for visitors who only have time for a brief stopover to go gorilla trekking, and nothing else. This is more likely to be the case for those in transit to somewhere else, or travelling in from a nearby country.

For most foreign travellers, however, the time and expense put into getting to East Africa means they want to do more activities while in the region, like go on safari or climb Kilimanjaro. For such travellers, Uganda is the better option as it has more to offer. But more on that in a moment.

Trek conditions in Uganda and Rwanda

Trekking routes in Rwanda are considered a bit more open and not as steep and slippery compared to Bwindi In Uganda. That said, Volcanoes National Park is at a much higher altitude than Bwindi and this can also make the trek more challenging.

Note too that while it’s easier to reach Rwanda’s mountain gorillas, Uganda has more habituated mountain gorillas and so admits more trekkers per day. About 80 people a day are allowed to visit Uganda’s gorillas. In Rwanda, the number of daily visitors is about 56. This makes obtaining a gorilla trekking permit in Uganda a little easier than obtaining one in Rwanda, especially if you aren't booking very far in advance. Read about our http://interiorsafarisea.com/experiences/

Something on offer only in Uganda is the gorilla habituation permit. This permit allows the visitor to spend fourhours with a mountain gorilla troop in the south of Bwindi Impenetrable National Park. The habituation permits costs $1,500, which is the same price as the one-hour gorilla trekking permit in Rwanda.

The habituation permit was introduced only recently in response to visitors’ desire to spend more time with the mountain gorillas. Only two gorilla troops have been set aside for these habituation experiences. This means about eight habituation permits are issued per day, so you have to book well in advance if you want one.

Visitors who do the four-hour gorilla trek get to take part in habituation activities, like making calls, collecting specimens, and even sometimes naming the individual gorillas. It’s a truly special, once-in-a-lifetime adventure.

For all the reasons discussed above, we at Interior Safaris East Africa recommend gorilla trekking in Uganda rather than Rwanda. Check out our suggested http://interiorsafarisea.com/package/10-days-uganda-gorilla-wildlife-safari/

which of course includes gorilla trekking in Bwindi Impenetrable National Park. You can also read through the reviews to see what our past clients thought of the experience. Please note this is a flexible itinerary – we're happy to lengthen or shorten it. We can also switch things up to suit your preferences and needs. We also find that some clients like to bundle a Tanzania safari or Kilimanjaro climb with their gorilla trekking adventure while they're in the region.

"Godfrey exudes positivity, confidence, and really was the reason we fell for this colourful, emerging location. He made us feel safe and has a passion for animals. And he loves his country and has interesting insights on its current affairs.”

Godfrey is our passionate, energetic and knowledgeable local guide

Ready to take the plunge?

If you're ready to explore Uganda Rwanda Tanzania and go gorilla trekking, or you just have some questions you'd like answered, press that pink button below and let's start chatting! http://interiorsafarisea.com/contact/ 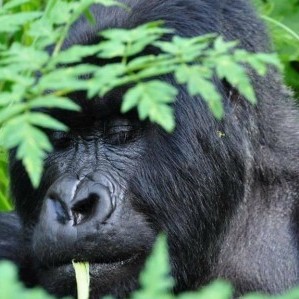